Does news help us? Do we become enlightened or puzzled by consuming news? How can journalism better help solve problems?
06 Sep 2019
• 8 minutes 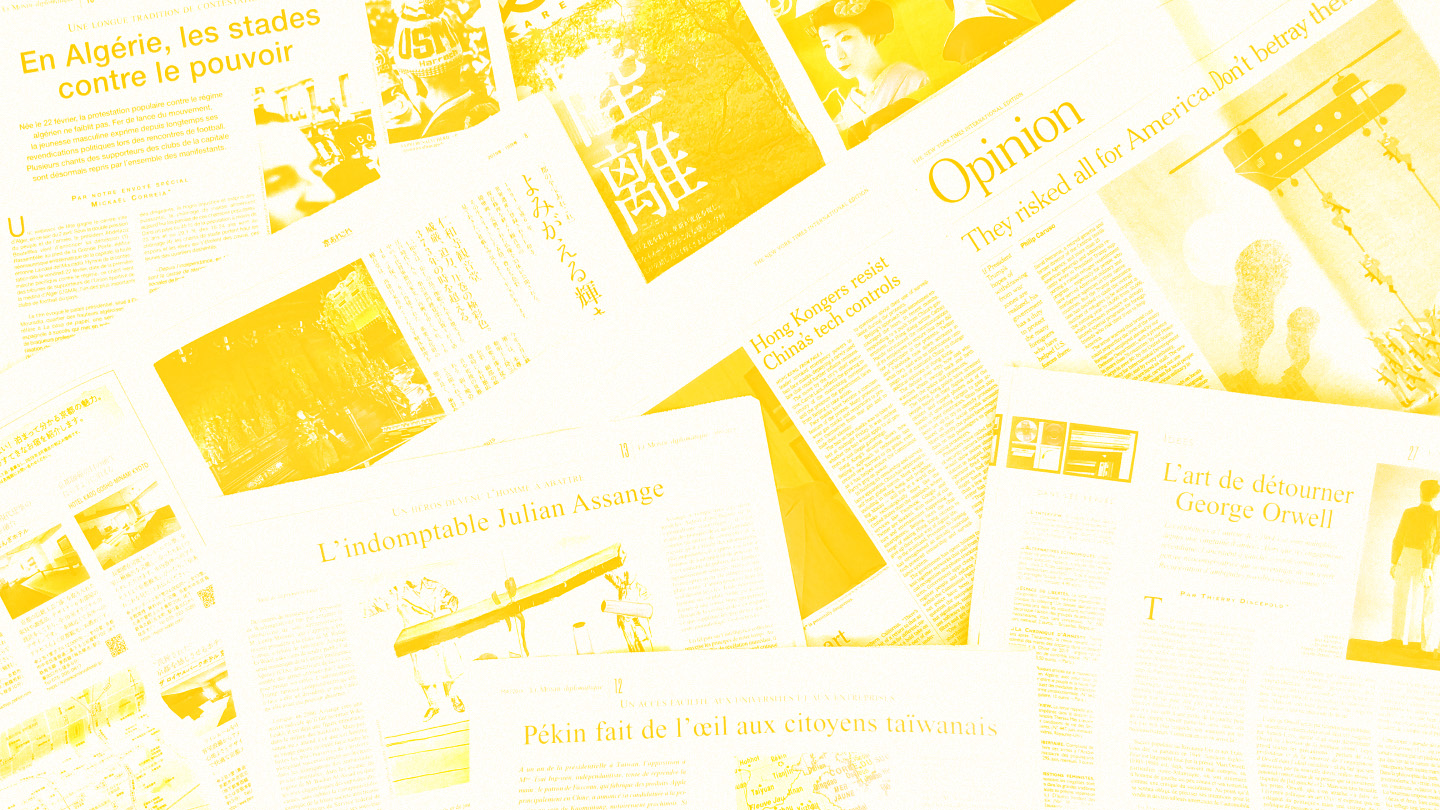 Information is abundant and harsh these days. Everyone sounds like shouting, if not throttling, at each other. At least it is what it feels like when you read online. When you turn to newspapers or broadcast media, it does not seem much better either. Conflicts, wars, disasters, contradictory reports and opinions. It is confusing and you are in the middle of the entanglement.

Do you feel like messy tribbles raining over your head? (Image: Giphy)

Last weekend I attended the Campfire Festival 2019 in Düsseldorf, Germany. It is an event about the relation between journalism, media, human and the digital world. The talks were multidimensional, cross-disciplinary and inspiring. It made me ponder over the role of journalism and news media in our current time—what and whom it is for—and question its utility and effectiveness.

Disclaimer: I am not a professional journalist. Comments here are, therefore, only from a regular newspaper reader, media watcher’s external point of view.

Has journalism failed itself?

What is journalism for?

Boundaries of journalism might be flexible. Its core function, nevertheless, remains conveying information1; by extension, empowering the informed2. Journalism has long tasked itself with a civic role. It has the duty to monitor powers, to observe them, and to report information back to the public. It is even regarded as the Fourth Estate, to counter the executive, legislative and judicial powers. In a liberal society, it even holds higher goals to fulfil: to educate citizens, to foster their critical thinking, to provoke discussions and exchange of views and ideas—so as to catalyse progress in society as a whole.

In recent years we have observed a drop of confidence in traditional press. Distrust in news media is mounting. They are increasingly considered biased. ‘Information is framed and presented only in ways which comply with their own stance.’ Or even, ‘journalists are fabricating “fake news” to influence public opinion and their actions’. These might have used to be just a few sparing, salty remarks, before politicians made them popular and now become more alarming. In Hanna Chalmers’ report, the significance of the shift in media trustworthiness perception is highlighted. Traditional media (i.e. television, radio, newspapers and magazines) are generally respected by the public, as their entry barriers remain relatively high (e.g. expensive to produce, limited outlets). Nonetheless, their perceived reliability is tarnishing the most. 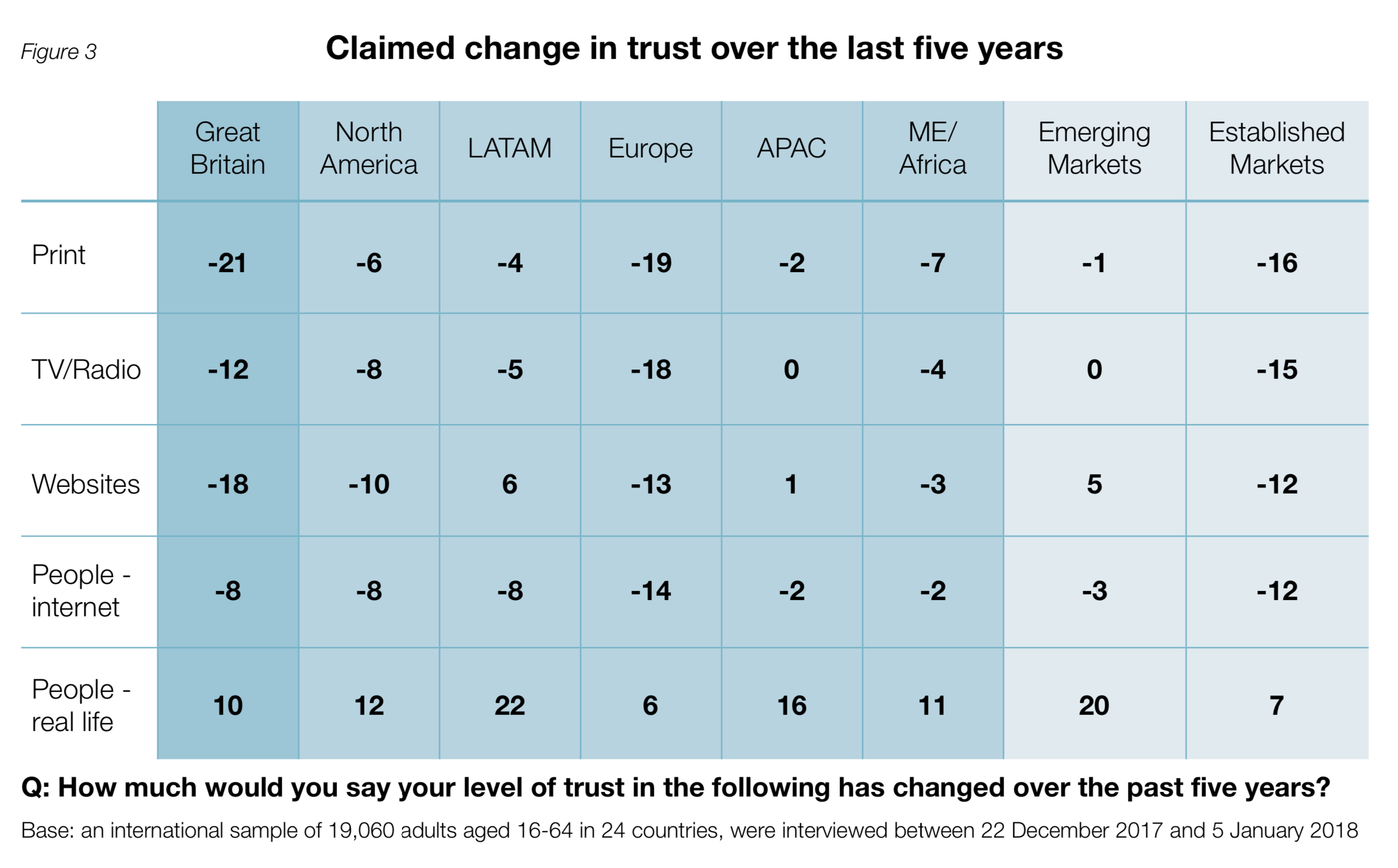 This scepticism does not necessarily portray any falling quality amongst traditional news media. Instead, it reflects how their pillars might have been shaken by the dominant role of social media, where information circulates behind preference-fitting algorithms without (or with only few) gatekeepers. At the same time, digital platforms are sprouting while stories claiming to be news are blooming across the Internet. The abundance of partisan information can be overwhelming and can in turn undermine public confidence in the traditional press.

A jinx to shun?

Scepticism is not the only endangering cause for journalism. Experiential avoidance (especially emotional) may weigh just as much. In a user research which I co-conducted during a journalism-remaking project, we found out that negativity infliction has become one of the causes why people reduce news consumption; or even avoiding it.

‘Open the newspaper these days and all you see is troubles and chaos. It saddens you even more after a long day of work.’

Of course, journalism is not meant to put a smile on people’s face. (It should not either lest it regress to mere entertainment.) The heightening emotional barrier to get into news consumption, though, does pose a real threat. This menace is not only to the news media, but also further to our civic society and democracy. If people are avoiding news and numbing their senses by hiding behind their routine, journalism fails to inform the public with the happenings around them. It fails to bridge the people with their representative governing powers and to hold the authorities accountable. It fails to educate a dependable population of rational judgements. In such case, we fail to cater for an atmosphere of social intelligence and progress. We fail to maintain but jeopardise democracy.

Hence, it points to a genuine need for journalism and news media to react, to rethink how to invite the audience’s appetite for quality news consumption, to re-buff their own image and to reconsider their strategy for approaching the evolving public; or else it risks locking itself up in the ivory tower.

Revitalising journalism and news media sounds big. There are two apparent aspects which it can get started with.

Press and news media should not represent the one voice they want to propagate, but the voices which exist in the setting. It is understandable that journalists and media houses hold their own interest scope and standpoints. How news stories are followed, collected, analysed, cut, shaped, and presented to the public subsequently depends on them. Loss of information is inevitable during the production chain. Yet, instead of simply persuading the public of their perspective, the bigger picture should not be forgotten.

Take Brexit as an example. Before the universal suffrage in 2016, as Rachel Oldroyd presented in her talk in Campfire Festival, Remain news media had overlooked the local voices and misjudged the proportion adhering to Leave. Coverage (especially analyses) for the other side was scarce. It was only until the ballots were counted that the public (and politicians) learnt—in the hard way—to have to deal with alternative voices seriously. Had they known more about the casting situation beforehand, the current deadlock situation of Brexit probably would have looked very different. 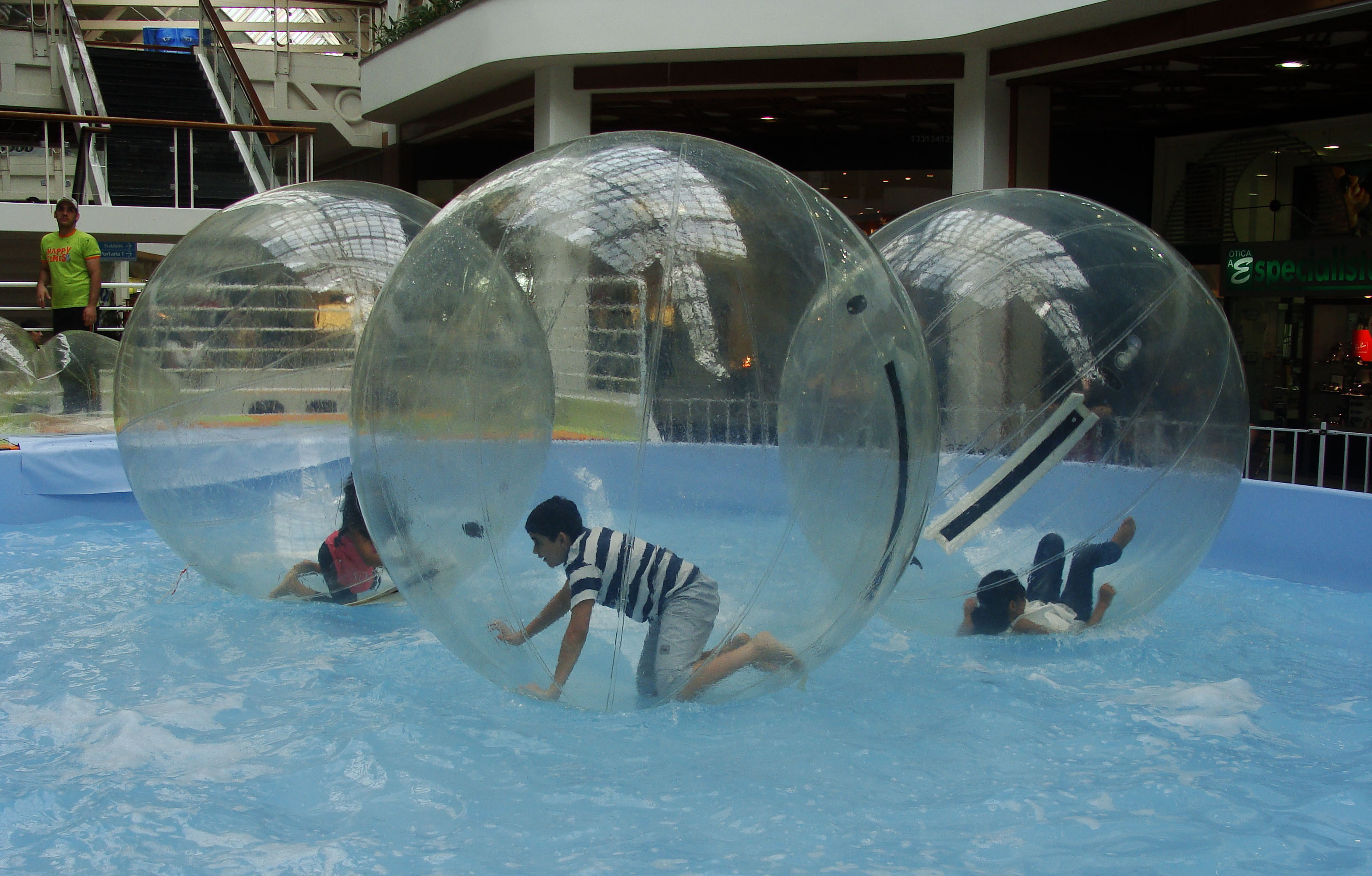 Are news media creating bubbles and putting us inside? (Image: Ben Sutherland)

In the social environment we live, we cannot simply strive for what we believe in without considering how the others would become. Similarly, journalists and media houses cannot only pin their words on own their stances and pretend to forget the rest. At times we might have overlooked: What matters for people? What is in their interest? What is at stake for communities and society? Or even for the country and the world? Journalism is not to segregate society but to objectively report what is happening; that should include giving speech to and shedding lights on all representable component parties.

The best way to bring back the disregarded voices is to approach them closer. The key lies within connecting the fringes which construct us as a whole. Extract stories of the people and report the news back to them. Whilst media coverage is often centralised at the political, financial hubs, revamping local press and giving speech back to the forgotten communities would be pertinent to begin.

The second aspect is about the journalistic role in problem-solving.

The current time is arguably not the best in which we would have hoped to be living. Open the window, we feel global warming and its associated climate issues (a solid emergency, by the way). Go to a supermarket or a restaurant, we are reminded of the unfairness that our food industry has instigated to our animal pals. Flip the newspaper, we are instantaneously confronted with all the swamping chaos we ought to mind.

Thanks to the Internet and all the communication technologies, information can flow more freely and become readily available in our age. Journalism, as one of the channels, undoubtedly help us learn and understand the world. It also makes us realise, however, how disarrayed the world we live in is; and, at times, how little we seem to be capable of changing it.

It is a duty for the press to report happenings to the public, be it cheery or disheartening. Still, we should not forget, as a higher goal, journalism is to provoke thinking, better judgements, discussions and eventually social progress. If knowing the facts is the step no. 1 (journalism), and understanding how complexities are formed and interrelated is the step no. 2 (investigative journalism), estimating what sorts of solutions could be applied would sensibly be the step no. 3 (constructive journalism). Journalists have been steadily monitoring how the world evolves. They have the expertise in analogising events and comparing solutions across the globe and time. They could make use of their broad vision and intellectuality to mirror possible, practicable solutions which have happened elsewhere4. Instead of simply throwing cold, hard facts at readers’ face, news press and media could guide the public towards solutions and consequently encourage advances.

Journalism is supposed to help us understand the world and to empower us to make better judgements. Its ultimate function is to engage people’s conscience in action and to stimulate social improvements. The audience of today are turning doubtful of its authenticity and becoming bewildered amidst the concurrent intricacies. Journalists are, hence, in the most critical position ever to connect with the people, to converge crowds of different opinions on the round table, to objectively lay down all sides of the truth, and to supply the public with quality references, in the hope of steering the group towards resolution.

This article is also published on Medium.